A race of giant humanoid beings (on average five times the size of a human) genetically created by the Protoculture as weapons of warfare. The Zentradi fought a war against the Supervision Army of the Protodevlin, a war so devastating it resulted in both the defeat of the Supervision Army and the destruction of the entire Galactic Republic of the Protoculture. After the war, the Zentradi continued a search and destroy mission throughout the galaxy for Supervision Army survivors and during this mission encountered humans in 2009. Prior to human contact, the average Zentradi possessed intelligence equivalent to that of human primary school children. After exposure to human society and knowledge, the Zentradi have shown a much greater potential intelligence. The average Zentradi/Meltrandi appears to be 8-10 meters tall, with males somewhat taller than females. Britai was a commander type Zentradi who was much taller than the average Zentradi (13.54 meters tall) as well as possessing greater strength and endurance than other Zentradi (Britai was also able to survive for short periods in a vacuum).

A note about Zentradi/Meltrandi: The term "Zentradi" is still utilized in the greater Macross continuity to refer to both Zentrans (male) and Meltrans (female) as the same species. However, the terms Meltrandi/Meltran are also still used to differentiate the female Zentradi and the word "Meltrandi" is still used to describe a female Zentradi as both female and as a different species than human (despite the near 100% genetic similarity with humans). 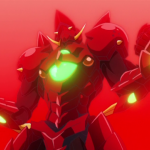